The Salt Design 2018 Calendar is here – a homage to our most loved modern artists and art movements.

Whaam!! Roy Lichtenstein’s work is certainly striking and well-recognised through his use of primary colours, bold black outlines and half tone dot and line patterns.

As a leading figure in the world of Pop Art, his work was greatly inspired by enlarged comic strip styles, which often depicted parody and female portraits. “I take a cliche and try to organize its forms to make it monumental. The difference is often not great, but it is crucial.” Roy Lichtenstein

He most famous works included Drowning Girl, Whaam! and Girl with Ball – a particular favourite of mine.

I was so excited to see his work at the MoMA in NYC, with the highlights campaign and book displaying his work on the cover. The gallery label from the artwork reads:

Lichtenstein took the image for Girl with Ball straight from an advertisement for a hotel in Pennsylvania’s Pocono Mountains. In pirating it, however, he transformed the photographic image, using a painter’s version of the techniques of the comic-strip artist. The resulting simplifications intensify the artifice of the picture, concentrating its careful evocation of fun in the sun. The girl’s round mouth is more doll-like than female; any sex appeal she had has become as plastic as her beach ball.

In the recent years, I have followed the work of Camille Walala and Gemma O’Brien (Mrs Eaves101) who use a brighter colour palette and modern take on this style. Gemma’s decorative background patterns, line work and dotted elements create energy and dimension in her typography – which I love, especially due to the large scale of her murals!

A few of our favourite and inspiring creatives to mention include:
• Camille Walala
• Gemma O’Brien
• Wanissa Somsuphangsri

Of course, as an added bonus, we couldn’t help but create FREE wallpapers for your desktop and mobile devices!
Be sure to subscribe to our blog or follow us on social media (Instagram / Facebook / Pinterest / Google+) for when they are released each month. 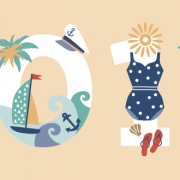 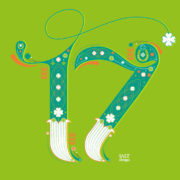 Something Digital…
Scroll to top